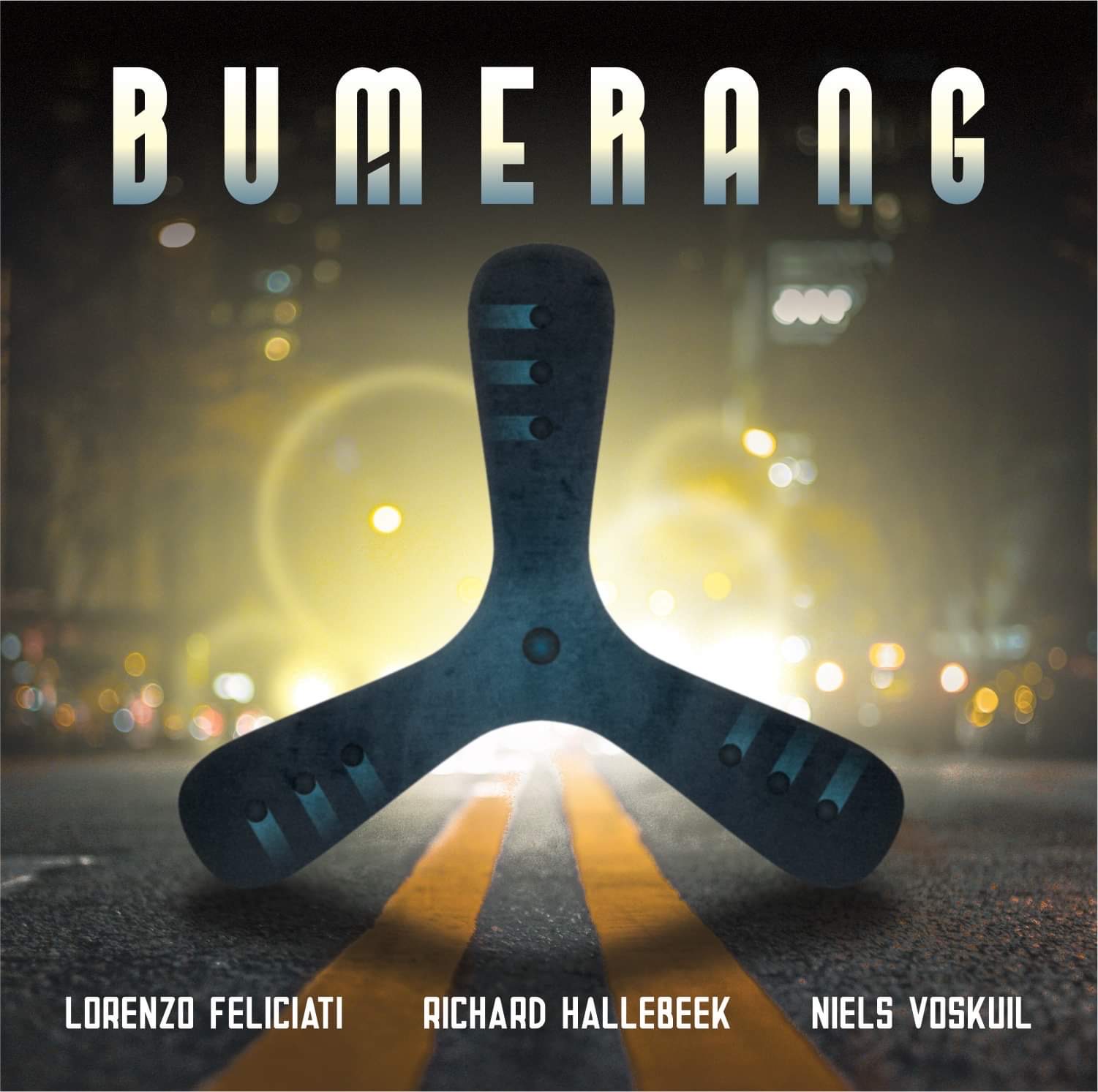 Bumerang is the brainchild of Richard Hallebeek, Lorenzo Feliciati and drummer Niels Voskuil and has been in the works for over 2 years.

When Hallebeek and Feliciati met for the first time in 2017, when playing together at the North Sea Jazz Festival. They quickly hit it off and kept in touch afterwards, making plans for a collaboration. Drummer Niels Voskuil, who had played and performed with Hallebeek before, also joined and the trio first recorded two tracks in the studio together (‘Friday At Lastʼ and ‘Bumerangʼ) with the intention of releasing a single track digitally. With a mix of heavy rock, fusion and groove, the music got such a good response that the musicians decided to go for a full length album.

Bumerang was recorded over the course of 2018 and 2019, as an album of 8 ‘realʼ compositions (no band jams) with all songs co-written by all three band members to create a unique blend of styles.
Although the CD is a trio CD, it features overdubbing with guitar synth and guitar layers by Hallebeek on each song, and programming by the whole band, to fully showcase the songs and harmony.

Bumerang features solid songwriting and has more than enough tasty and over-the-top musicianship to fully satisfy the biggest guitar fans and jazz-rock music lovers out there.

The CD has been recorded in three big studios over the course of 2 years. It seems to be rare these days that musicians actually play together, when one can merely overdub on recordings sent back and forth through the internet. Although that’s a great technical solution, the Bumerang trio actually played together in the studio and also live on stage, giving an edge of joy and interplay to the music that would otherwise not be achieved.

RICHARD HALLEBEEK
Amsterdam-based guitar player Richard Hallebeek is well known for his legato fusion guitar playing. He has been playing guitar for over 39 years, and recorded and played with the lies of Scott Henderson, Frank Gambale, Allan Holdsworth, Shawn Lane, Gary Husband, Jimmy Johnson, Derek Sherinian among many others. He recorded 32 CDs, (for Mark Varney, Legato label) and has been named ‘best jazz/fusion guitaristʼ for three years in a row by Guitarist Magazine. He performed and taught with Kiko Loureiro (Megadeth) and Allan Holdsworth at the ESC 2011 Festival in Sicily and was invited by Dweezil Zappa four times to join him onstage during his tours at sold out venues Tivoli, Vredenburg and Melkweg, Amsterdam.

NIELS VOSKUIL
Niels Voskuil played with Richard on his trio CD ‘One Voice’, released his solo CD ‘On Her Return’ in 2012 with Steve Hunt, Ernest Tibbs (Allan Holdsworth) and is currently performing with Dilana Smith from the USA TV show ‘Rock Star: Supernova.’